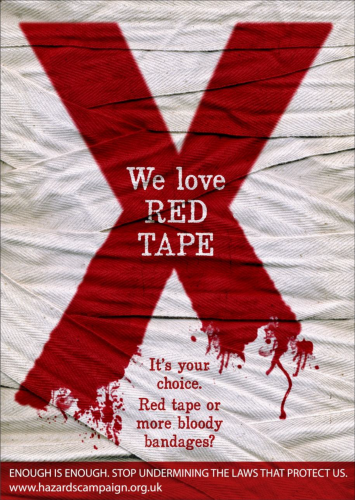 Safe and Healthy Work for All. The Hazards Campaign has launched its Manifesto for health and safety fit for workers - decent jobs and decent lives.
Download Now
 
SHARE

Health and safety has been ideologically demonised as ‘pointless red tape’, a ‘burden on business’, in order to undermine its value and its essential role in protecting workers and others from unscrupulous businesses in a deregulatory process called ‘better regulation’. The reality and evidence shows that ‘red tape is indeed better than bloody bandages’, that regulation and enforcement prevent harm and are an overall social good, saving lives, health and money.

Evidence shows the three factors that make work safer and healthier are strong laws, strictly enforced and strong, active trade unions. Unionised workplaces with elected safety reps using full Safety Reps and Safety Committee Regulations rights are up to twice as safe as non-union workplaces and evidence shows that a reduction in trade unionisation has led to a significant increase in work fatalities.

All of these positive factors – laws, enforcement and trade union organisation – have been attacked and undermined by deregulatory neoliberal governments since Thatcher’s ‘bonfire of regulations’ to ‘Better Regulation’ and the 2010 Coalition Conservative-led government. This turbo-charged deregulation, with derogatory statements made by David Cameron promising to ‘kill off health and safety culture for good’, castigating health and safety laws as an ‘albatross’ and a ‘millstone round the neck of business’, led to Health and Safety Executive (HSE) budget cuts of 50%, massive cuts to enforcement action, prosecutions and inspections by the HSE and Local Authorities (LAs) and attacks on trade unions’ ability to protect workers over the last eight years.

No-one should be injured, killed or made ill at work in preventable incidents, and all workers should be able to go home healthy at the end of their shift. This is a basic human right and it is the job of the state to establish a system of law and enforcement to ensure this right to life and health at work.

This makes moral, but also practical and economic sense, as poor health and safety costs British society an estimated £60 billion a year. Improving health and safety would save money for businesses, workers and their families and the overall economy; save lives and health; contribute massively to reducing pain and suffering; improve public health; increase life expectancy and years of healthy life; reduce poverty and inequality; and save money in reducing cost to the NHS, the state and employers from work harm.

Health and safety at work is an equality and class issue: generally as your pay goes down, your risks go up. Lower paid, less secure workers face more risk of being injured, made ill, being killed at work, dying from work illness including all the major killers of heart, lung disease and cancer, and even of work-related suicide. And they are less able to protect themselves, or to complain or get their rights to safe work enforced, especially as most are not in a trade union.

Hazards Magazine shows how health and safety abuses frequently overlap and interlink with other employment issues in complex ways: ‘Higher paid, higher status work is relatively immune to work-related health problems – occupational injuries, cancers, nervous system disorders, suicides, reproductive problems, strain injuries and cardiovascular diseases are all concentrated in the less well remunerated work.The lower your grade, the higher the risks. You are the model worker. You will work until you drop. The pay is bad, you can’t complain. You need the job. You sweat, you bleed, you break down. You are sick and tired of low pay and you may well be sick of it.’ warns Hazards Magazine in ‘Degraded’.

Precarious employment, zero hours contracts, temporary and agency work, the so called ‘gig economy’ and exploitation, and issues of low pay and long hours is spreading through the economy. We reject this indecent exploitative work shading into modern slavery that many employers want to become the ‘new normal’, because it is making us sick to death. Much of this work is enforced by under-funded local authorities and falsely considered ‘low risk’ where proactive inspections have been banned.

There are sectors where employers are under little or no enforcement scrutiny or pressure to tackle these risks and a huge swathe of vulnerable workers almost totally excluded from the enforcement of their right to good health and safety at work. Issues like working hours, fatigue, and low pay also need to be properly recognised as a massive occupational health problem and come under the auspices of health and safety regulation.

To properly protect workers, all agencies enforcing employment and wage conditions need to come together with the HSE/LAs to tackle the complex and interlinked employment and health and safety risks in these sectors. In 2018 work still hurts and kills on an industrial scale. The HSE does not collect or publish complete figures for work-related harm.

The Hazards Campaign expert-based estimates are that around 1,500 people are killed by work-related incidents, 50,000 die from work illnesses, millions are made ill by work with an estimated 600 so despairing they take their own lives, and 555,000 workers self-report injuries in Great Britain every year. Almost all work injuries/illness are due to employers’ mismanagement and should have been prevented by compliance with the law.

Inequality and discrimination at work mean that the most vulnerable workers – the poorest, women, young, older, black and ethnic minority, migrant, LBGT workers – are at more risk of being made ill, injured or killed due to work. But due to the acceleration of deregulation in all its guises, all workers are at far more risk now than pre 2010, and adding in the effects of austerity has led to the epidemic of stress-related illnesses across all work sectors leading to long term mental ill-health. Poor health and safety costs society and the economy an estimated £60 billion a year as employers shift the cost of their profit-saving risks to workers their families and the state.

The current health and safety system based on laws, access to justice, enforcement and active participation of workers and their unions, has been broken by neoliberal ideology of deregulation and austerity cuts which led directly to the Grenfell fire, and the continuing unacceptable workplace toll of up to 140 people a day killed at and by work. It has been debased by lying about its value to workers and the public, changing the regulatory environment to make workers’ lives and health explicitly subservient to business interests, slashing funding for its enforcement, commercialising, privatising and monetising it.

To make work safer and healthier we need to reclaim health and safety regulation, reframe it as a basic human right, a social good – we love red tape because it is better than bloody bandages – end its ideological deregulation, restore effective enforcement and remove all restrictions on trade unions to organise, educate, agitate to protect workers lives and health as a huge body of evidence attests to their impact on making work both safer and healthier.

And it is also essential that the HSE/LA system is revamped as a powerful, independent occupational health and safety preventative system, linked with agencies that enforce employment laws with good health and safety conditions at its heart.

To create a health and safety system fit for all workers at the heart of decent jobs and decent lives for all the Hazards Campaign calls on government to:

A list, compiled by Mick Humphrys and Dave Calfe, of fatalities on the footplate since 1948 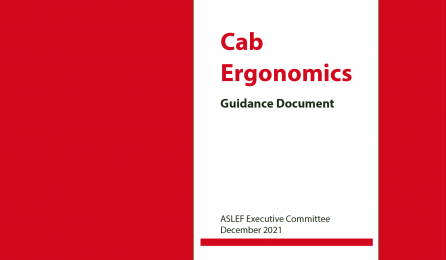 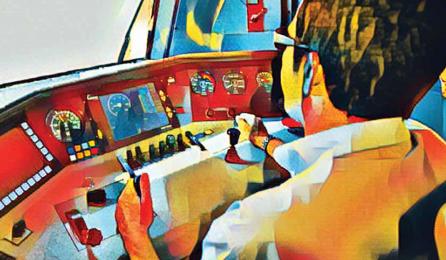 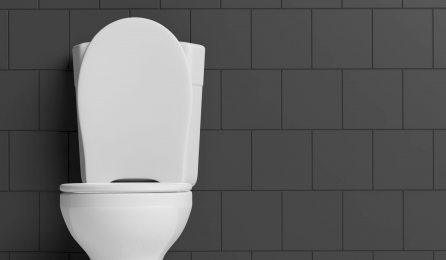 Health Implications of not having access to toilets at work
Report